I will probably never forget the atmosphere of the group I sat with to see the opening episode of Yuri on Ice. While Yuri himself might not have landed those trickily choreographed jumps, director and clear ice-skating fanatic, Sayo Yamamoto choreographed something exquisite; every joke got its due laughs and I’m fairly sure a few shared tears in sheer empathy with Yuri’s sense of failure… but near the end of the first episode, something extraordinary happened. A spectacle few anime can achieve was achieved. In short, Yuri on Ice lives up to its opening song’s lyrics: the room fell into utter silence in the aftermath of Yuri’s ‘final’ performance, such that I heard 20-odd hearts beating. Yes, Yuri on Ice is making history, and it makes this sports competition unmissable.

A lot of performance anime will attempt to lampshade a sense of spectacle, literally saying in the dialogue lines such as “I can’t look away!” Yuri on Ice’s performances are much more humble, quietly entering with minimal fanfare or self-explanation. In fact, the internal monologues are often contrary; they’re filled with so much character and emotion that it digs deeply into the mind of a performer, which is usually self-critical and giving an honest look of living in the moment. Paired with truly gorgeous animation, Yuri on Ice’s performances can give goosebumps at each point. Put simply, you cannot look away.

In its downtime, Yuri on Ice continues to be a humble and friendly affair. Yuri himself pops up to narrate what’s been going on around the start of each episode in goofy skits, and the series’ rapid-fire joke timing can seriously catch you off guard. Even as it builds up to the melodramatic cornerstones of the series, Yuri on Ice continues to enjoy itself; its arcs are simple, and it refrains from over-selling it, by utilising just the perfect amount of ambience and keepings its comic flow perfectly intact.

Indeed, Yuri on Ice is a fairly simple setup. Yuri himself is a 23 year old ice-skater who failed on the international stage, and is close to retiring – but his ice-skating idol, Viktor, takes a break to personally coach him after being impressed with his ‘final’ (off-stage) performance’. As the series goes on, there is a brief but surprisingly depthy training arc, and then the series gets into its competitions where it meets emotional beats you’ve seen before. But it does it so well that you’d almost miss how by-the-books it may be on paper – not only are the competition’s performances almost entirely animated, but the emotional beats are impressively wrapped up in efficient character development.

This is the part of the review where I’ve got to address the romance aspect, which is controversial for both being there and not being there enough. As you could probably tell from my tags list, I consider this enough to be a romance in its own right – with an offscreen kiss and literal sharing of rings, it’s absolutely there. I wouldn’t be lying if I thought that, at times, it was perhaps not the most organically inserted. Their somewhat fanservicey flirting seemed more fitting for the duration that the anime could allocate to them, but things like the aforementioned ring share just felt a little too fast. Viktor and Yuri have such incredible chemistry, though, that I found myself absolutely rooting for them in their picturesque romance.

A surprising amount of characters are given focus throughout Yuri on Ice. Yurio, a 15 year old Russian skater just entering the adult leagues, gets the spotlight almost enough to be called a main character, and has an extremely cathartic character arc that is equal and opposite to Yuri’s, but absolutely full of the same passion. Beyond him, the other skaters are a mixed bag – there’s a bit of incest bait between one and his sister, and another gets really horny while skating, but the rest are generally well written. Particularly Pichit, the skater from Thailand, who wants to honour his childhood dream spurred on by a movie, but also JJ (THE KING!) and his well-built self-confidence.

Yuri on Ice did feel like it didn’t leave itself enough time at the ending. The tournament ends reasonably abruptly, even if it is a triumphant finale, and doesn’t quite get all the emotion it could have done. But Yuri on Ice will return for at least one more story and, if it’s anything on this level, then I cannot wait. Yuri on Ice promises spectacle and heart-pounding emotion, and at every point, it delivers. 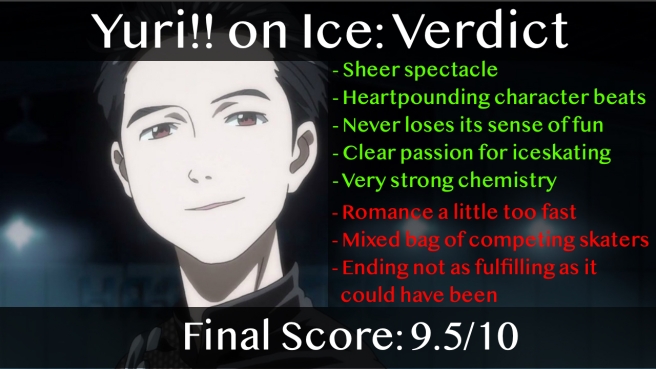