There’s probably going to be, if there hasn’t already been, a debate on whether or not Manaria Friends’ main genre tag is in fact Romance. While the romanticism of this show might not be rooted too much within physicality or sexuality (or even indefinability), Manaria Friends is undeniably very romantic indeed. 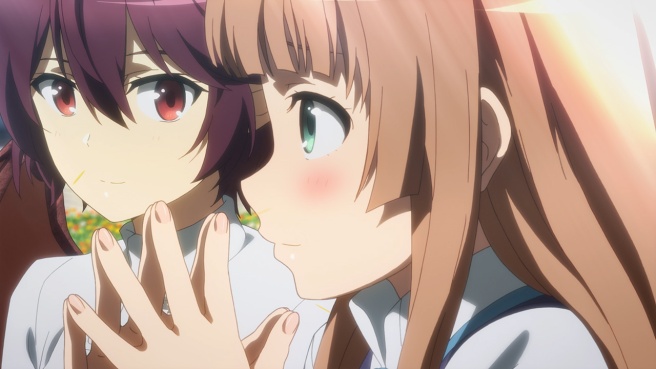 The thing that draws many to adolescent young love is the ephemerality of it all. Teenage years are the years of your life, as they often say, as hormones run high and everything seems so golden. The lighting is indeed golden, but the memories that Anne and Grea are forming are no less shimmering. There are no specifically connected episodes throughout this series – just brief little skits that detail the rampant emotions of excitement, panic, attraction and even tranquility as these two share time together. Many more amateurish affairs would fall into the pitfall of melodramaticism or pulpiness, but that’s perhaps this series’ greatest strength: there’s such an attention to detail to the subtleties of the feelings, ranging from the triumphant orchestral waltzes to the hushing breeze, and both the minute finger movements and lip twitches, and Manaria Friends captures the fleetingness, the explosions and the silence of adolescence with grace. 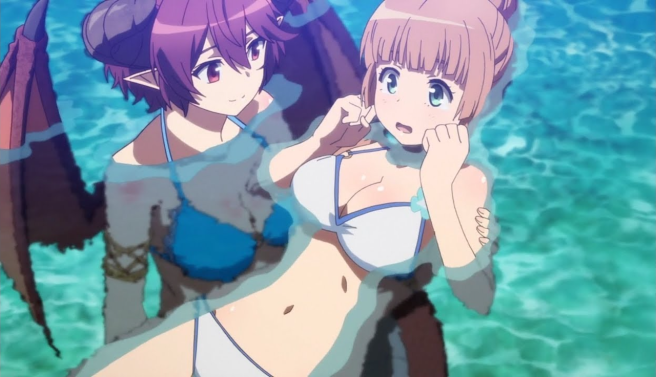 The relationship itself isn’t quite the opposite-attracts one it may seem. Not only are they different species, but Anne is generally the excitable one whereas Grea is the quiet and more mature one. However, they both go through very similar bouts of wanting, and one of my clearest take-aways from this show is the delicacy each girl gives to each other’s names. The common ground they share is made so beautiful through the effort they go to find it – the piano scene, the boat scene and also the library scene, becoming a few of my favourites in this montage of delicately handled romance. 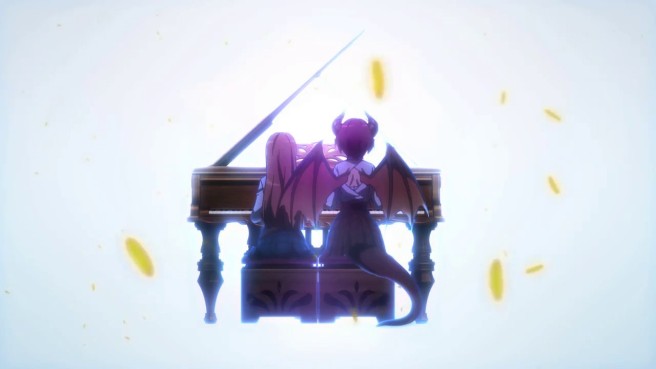 While gentleness is one of the series’ leading tones, that does not make it any less playful. Anne may be the more boisterous of the two as she teases Grea, particularly flicking her tail to some unscrupulous, sensual responses, but the show’s overall direction leads through many amusing instances. The vignettes that Manaria Friends chooses range in scope from playing meta-dress-up in city dates to battling magical monsters, and it is important to stress that the series keeps up with the extent of its ambitions.

CygamesPictures might be a new studio, but they put out some brilliant work. Nearer the end, some of the animation looked a little more rigid, and there were some hiccups matching the background movements to the character movement, and perhaps the fanservice quota is a little high, but that does not take away the gorgeous work here. Colours simply pop out in exciting ways across a giant colour palette, the golden morning lighting is phenomenally rendered and the storyboarding is o so effective at capturing all of the character’s rushing feelings. The romantic touches are utterly mastered through and through.

But, at the end of the day, one could deny that this is romance, if they so chose. The romantic gestures are heavily steeped in romantic framing, but they are not abundantly clear; the physicality is very flirtatious but it’s fairly restrained. The argument over whether this show is a Romance or not will probably carry on, but I don’t know why one wouldn’t say this is a romance; Manaria Friends offers the daily lives of two girls falling more and more in love with one another with beautiful romantic craft.