As 2018 began, Hugtto Precure (henceforth: Hugtto) quickly rose to the top as one of the best in class. With Junichi Satou (Princess Tutu, Aria, Sailor Moon) directing, expecting something revolutionary was given (though not as Revolutionary as the other major Sailor Moon director’s outing), but in many ways, Hugtto managed to match, and perhaps even exceed, his usual flair for mould breaking and crafting important, impactful stories. We even got the first male Precure, and he has enough gay energy to land a position in Yuri on Ice. Indeed, this is a show that breaks boundaries. While Hugtto didn’t maintain the high bar that it set early, it never distanced itself far from the podium.

Hugtto crafts an impressive base through fantastic thematic definition: time, future, growing up, and the very feel-good message that you can be whatever you want to be. Centring tightly on its characters and their brief dramas with only occasional outages to supporting cast members ended up being a resounding success: it built up a strong rapport; it built up a strong foundation; it built some increasingly strong characters, and used them on some thought-provoking and endearing monster-of-the-week, occasionally befriending-the-bad-guys fluff. It’s a low-commitment weekly watch with punctuated, charming dialogue, easy gags and a recurrently strong production; some occasional exceptional animation or cinematography too, oft making use of minimal animation and art for maximal effect.

My issues represented whimpers moreso than roadbumps; a gradual loss of steam rather than any actual halts. That’s largely because the characters are given disproportionate care.

Despite stealing the pink role, Hana doesn’t get quite enough major screentime until very late in the series. The few instances she does where it feels a little wanting. With roaring cheers to her lungs, she has more than enough charm and a high degree of expressiveness to make a strong impact, even despite the progression she’s making, and for all her bark, she never seems to be lousily repeating platitudes. Her character is built on a strong understanding – even working through misunderstanding – and the gradual change in that makes her very endearing. But she simply isn’t given enough time to flourish.

Saaya’s love of drills is another tool that Hugtto uses in its arsenal to refute bleak and foregone futures: a bit of gender role shtick is always appreciated, even if it never goes beyond a gag. Whenever given an episode, Saaya’s focus generally lands on motherhood, or more specifically sometimes, her own mother. As fellow actresses, they are somewhat in competition, and the low amount of time spent together has created a distance. Unfortunately, this arc is just a little too repeated, and never given quite enough effort to truly stand (is it surprising that episodes with weaker than usual art landed on her episodes?).

It’s a tradeoff. Homare and the Twin Love Rockers got exceptionally developed in exchange, and I’m more than happy considering the gusto that they gave the screentime.

Homare has distinctly two powerful arcs throughout the series, and delivers each with a sense of relatability. Depression, and her first love. Her battle with her skating career immediately delivers one of the major hooks of the series, and the depth to which the subject is tackled makes it one of the bravest kids shows in recent memory. While her first love is not nearly as unique, the adolescent push-and-pull of her emotions are beautifully portrayed, and while I struggled to really understand where it came from, the hormonal kick out of it was strong enough to wash my worries away.

The Twin Love Rockers are introduced relatively late into the series (15 or so episodes, in fact), but after their first foray into Precuring, they dominate. After they begin Precuring, almost every fight resolves to their power-ups until new ones are introduced, and further, most episodes deliver their relationship on a platter. There’s an element of yuri-bait to their relationship, I will add; the overt romanticism of the pair is hard to swallow as plausible deniability is always a card kept close to the show’s chest, even when they’re declaring love to one another. However, the extremity of their closeness is brilliant character building – however, when problems arise for them later in the series, the pair’s brilliance wears off somewhat. 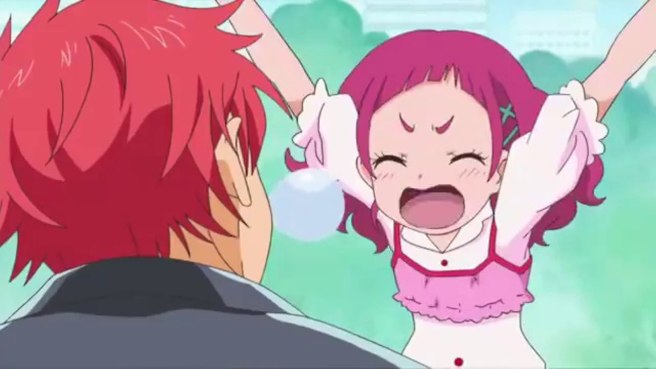 The show never really stopped being a fun ride, but towards the midpoint it began to run out of interesting episodics, or was caught building some fairly weak arcs. One arc around episode 36 or so is frankly unwatchable to those new to the franchise that have no intention of watching the spinoff movie: it exists solely to set that up, which is pretty lousy. Even if the episode was a visual spectacle, it’s out-of-place, and the show returns to business as normal thereafter. Because of these little tidbits, the show gradually peters out on its way to the finish line. It’s reasons like this, as well as the confusingly timed excuses to give the girls power-ups, that mean the series is a pickle for pacing. The show gets it together to make its conclusion a crazy ride, but it felt like it was returning to the bane of almost every magical girl show’s scripts: platitude spouting to defeat the bad guys.

While it’s easy to rag on its hangups, I can’t let go of how impressive it began, and how impressively it kept it up for the majority of the year 2018. Hugtto Precure leaves an immediate impression, has a strong cast, and makes bold moves most consistently.