Opening episodes or arcs are often a bit like an appetiser. They give you a taste of what’s to come, before a much larger and more expansive meal is set before you and builds into something great. I say this, because I initially thought that Eizouken’s opening was exquisite, flooding the senses with lucid, surreal imagery to create an imaginative palette for comedy and excited animation allegory. Sadly, Eizouken’s development across its 12 episodes showed that this appetiser was in fact the main course, and is happy to gnaw the bones cleans.

Excuse my, perhaps, overly done metaphor for a second, because I think it really needs expanding. Eizouken is an anime about the chance meeting of a 2d animation prodigy with an anime-concept development nerd and her money savvy best friend. The trio setup an anime studio-of-sorts as a school club, and do battle with their bizarre school council, find funds and create animation. When putting out ideas, they take regular symbolic detours into fantastic, dreamlike landscapes, demonstrating the group’s shared ambitions in a really fun way. Through the hole in the ceiling, the group find themselves in space, desperate for air, desperate to get back; beyond the tunnel is a city in another world, where aliens hunt them down – these lucid visions are visualisations of the concept design process, and it’s so awesome.

Though, take a step back from the dreamscapes, and it’s a run-of-the-mill school club setup. A joke here, a bath episode there, a school festival etc. I’ve gotta hand it to the team for never sexualising, infantilising or overtly feminising its cast – though there are definitely things they could have done to bring them out of their shells.

The anime seldom bakes in the progress as creators or producers. Mizusaki is the animation prodigy, but she was brought up by acting parents to become a model – a lifestyle she dislikes, and used dancing lessons and such to hone her ideal craft. She is shown in a flashback, where she hung out with her grandma as a child, to develop her understanding of the intensity of human movements, which translates into her love of animation. However, her skill is shown to be raw talent, meaning that little really changes. She’s just good, and that’s something you’ve got to accept. Her comrades are similar, with an aptitude rather than a progression, and it leaves a disappointing aftertaste.

Because, what I’m saying is, as creators, little changes throughout the show. They don’t change to overcome their challenges, but do they grow in other ways? At the beginning, the trio share a common goal, and while they spend time together, their connections don’t deepen. While we get some occasional flashbacks, such as seeing how the money-savvy Kanamori became that way, and the aforementioned Mizusaki flashback, but neither of these things are shared with the others. There’s a nice moment where Mizusaki solves her issues with her parents, but that’s the sole moment of continuous character building in the show. 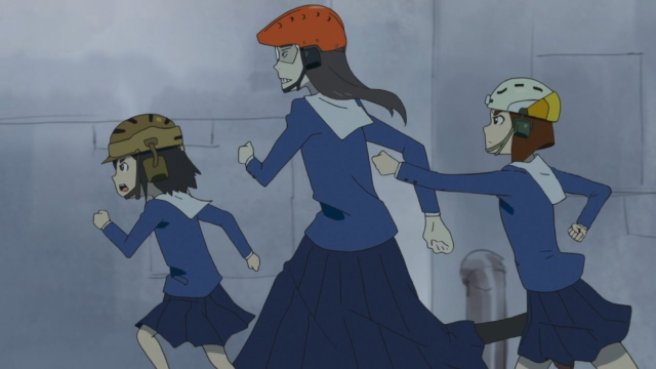 Eizouken isn’t interested in these things. Its story is solved by simple solutions, ‘go get ’em’ attitudes and such, because again, it’s not interested in meaningful conflict. The anime creation is undeveloped, with the occasional portrayal of music mixing or drawing but little in the way of explanation or exploration, unlike, say, Shirobako, another anime about making anime which has everything Eizouken attempts but with more heart.

What Eizouken has is bundles of creative visual art, but that gradually loses its shimmer as the show goes on, where it becomes apparent that the art consistency can’t keep up with the creative vision and the soundtrack reveals how few tracks it really has. But, more than anything, it becomes difficult to care about the shallow conflict and shallow characters, and there’s little pull back to the next episode other than some mildly flavoured comedy and inventive imagination sequences. This Eizouken meal might have been tasty at first, but it quickly left me hungry for more.