In the fully CGI anime, Kuutei Dragons, huge beasts roam the skies – though they are far from resembling the winged lizards of most cultures. The colourful beasts are perhaps more amphibian, though many have plant-like features. Such creatures are a natural resource to the human population of Kuutei Dragons, whose ‘drakers’ (dragon hunters) use flying zeppelins to fight the creatures on equal terms, killing for meat and oil. If only bones were being harvested, too, because Kuutei Dragons would be creating some potentially real-life parallels with whale hunting.

But, let’s allow Kuutei Dragons some breathing room to create a narrative before meta-analysing it, shall we? 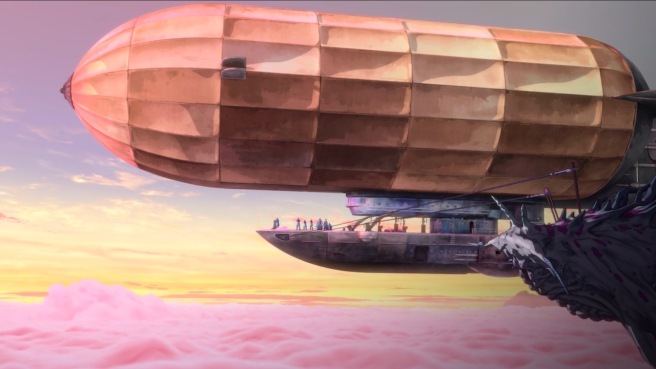 Takita is a newbie on the Quin Zaza, a steampunk-like draking ship that is independent from the affluent draking guild. The rag-tag group drift between towns, hunting dragons and trying to get by. Much of Kuutei Dragons follows their adventures in an episodic style, developing the cast and the world in equal measure – yet, perhaps most interestingly, is how the show factors in cooking.

Kuutei Dragons’ world is an expansive, dreamy world, and this goes far beyond the show’s gorgeously lit skies and detailed mountain ranges or towns. Mika, the ace hunter of the Quin Zaza, is dragon obsessed because he is comically desperate to eat; but he is also a connoisseur, and the show regularly takes detours to show the crew cooking dragon meat in interesting and new ways (mostly for him). The once-an-episode occurrences appear in novel ways, and show lots of new facets of the world; Vannie’s countryside-recipe sandwiches; the indigenous mountain tribe’s dragon stew – one can see how the world is thought out, not just geographically, economically, hierarchically – but also in its cuisine! What a novel prospect, and with ingenious moments of Yoshi, the head chef of the Quin Zaza, beating meat with a wine bottle, is an absolute treat to savour. 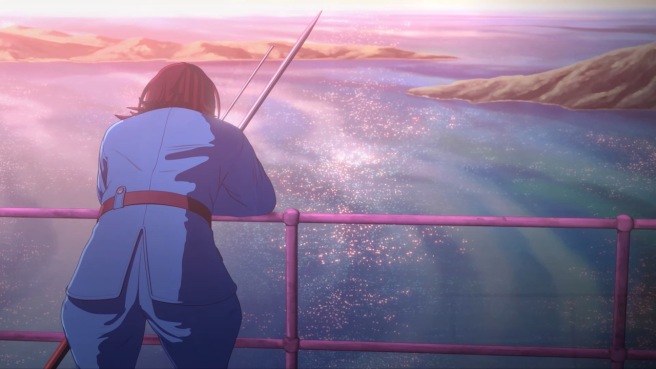 The meat of the show (ha!) is, as you guessed, the crew hunting dragons, but this is split in the episodic shenanigans of living in the air to the catchy bops of the staccato strings. One episode sees the crew stuck in a storm and questioning whether a mythological ‘glowing’ dragon exists, culminating in a confrontation with legend. In another episode, the crew are chased by pirates, and must fight for their lives against a more human threat. Yet, the show takes brief detours to show one of the only female drakers of the crew, Vannie, and her mixed feelings of isolation in the air, mirroring Baba and his unsuspecting hobby. Actually hunting the dragons is no small feat of bravery and acrophobic stress as the cast fire harpoons at the dragons and then ride the string on a hook. It took a lot of bravery from me not to puke at the fright of heights, but for Mika and the gang, that’s just another day in the life!

I’ve talked much about the concepts, but little of the raw feeling of the show. Kuutei Dragons is a resounding success because it digs deep into the petty troubles and finds that human connection. Jiro, the newly ‘come of age’ draker of the crew, fights tooth and nail to protect a prostitute called Katja in the midseries. His battle with the most fearsome dragon in the entire series is nail-biting; a particular scene, where the minuscule Jiro stands up to the dragon’s humongous wings, uses such a sense of scale in striking wide shots to capture the awe of the moment. The use of size really is key to the success, because the CGI world really is ginormous, and was captured in the heart wrenching final flight around Quon. Kuutei Dragons is consistently stunning with its visuals and allowing its string section to let loose into tremendous crescendos, leading to a series chock full of touching, inspiring standout highlights. 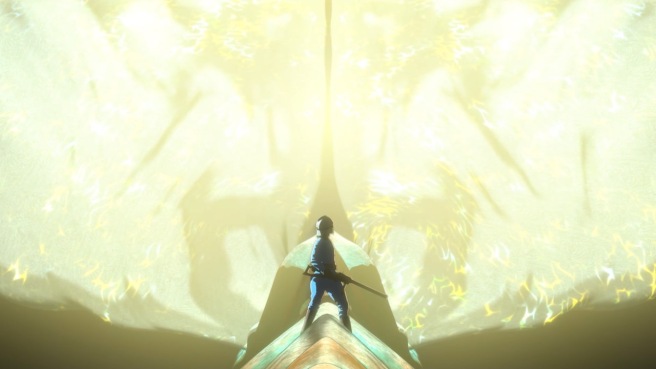 Yet, at the same time, the show has such humanity. Of course, Mika’s obsession with dragons goes into the comically absurd and takes away from that, however, one must only look at the fear the crew feel when Takita goes missing – it’s genuine! The feeling comes across even in the small moments, as the gruffly voiced Niko says that Jiro is ‘like a little brother’, or when Crocco worries about his ship’s safety. Yet, my favourite moments are probably the little tidbits here and there, like the crew yawning on their way to ‘another day at work’ to dissect a dragon, or Gibbs needing help to do his laundry. There’s cliques, largely owing to the room assignment, and you can feel the different groups formed.

More politically in the world, however, the crew look down on the guild’s drakers who use poison and hunt exhaustively. This is quite the contrast: many hunters are seen praying before they dissect huge dragons; Takita saves a baby dragon while promising she will later hunt it – there is a subtly building message here. Draking’s depiction is decidedly neutral, because the majestic beasts of the sky demand respect. It’s leaning into ‘sustainable hunting’ territory, isn’t it? Well, it’s certainly not the message I expected from a Japanese anime/manga, considering the country’s recent history with whaling – but media is always going to be more liberal than their country’s worst. If you were worried about what message such a clear parallel holds, fret not too much then, because any politics of the anime are mild. Instead, go into Kuutei Dragons and dream of wide, open skies. For Kuutei Dragons’ short duration, the wind is in the sails. And it might just put the wind in yours, too. 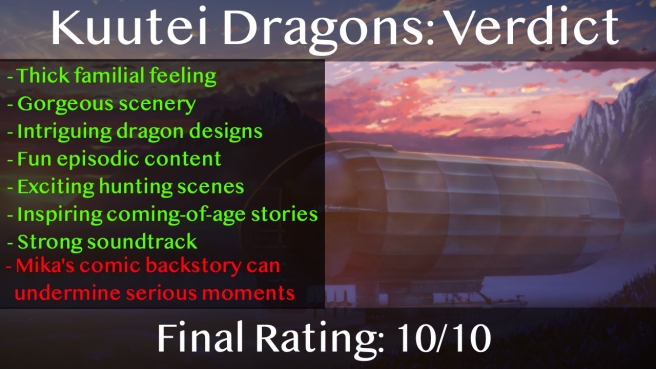