Oh? Yet another double episode premiere? Not that I’m complaining! Unlike Re:Zero The Director’s Cut or ID:Invaded which also had hour specials to open, Darwin’s Game’s opening pairing of episodes don’t feel like a necessity. Right at the mid-point of the first episode does the pacing feel like it needs some credits. That’s not a huge problem for many, but it is a question mark about the series more broadly.

So, split nicely but meaninglessly into two equal halves, these episodes detail Kaname’s introductory and second match in the titular mobile game, Darwin’s Game. It’s no ordinary game, as we learn from the brutal opening where one of Kaname’s friends desperately (and selfishly) recruits Kaname for aid when he’s being chased by a creepy baseball mascot murderer. To the detriment of his surviving best friend who knows about the game’s reality, Kaname blindly clicks on the notification to find out what this ‘free to play game’ is, and quickly winds up in a near-death situation where the same murderer is chasing him on his way home from school. 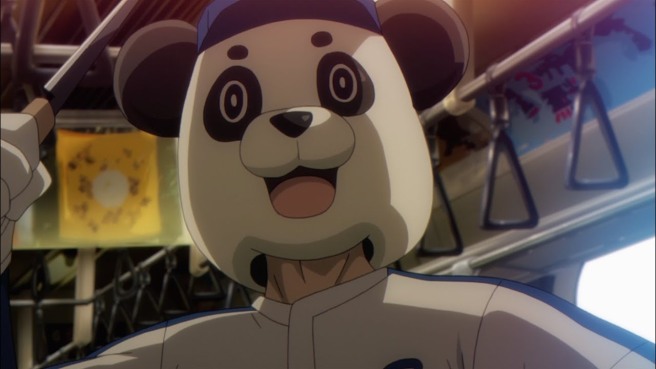 Darwin’s Game is high-concept fluff, but in reality it’s extremely thrilling. The game is fairly simple – you have a timer to murder your target, who can either retaliate or escape. However, escaping is a feeble option, as Kaname finds out, because the app shows a rough location of the target to the killer. Kaname is slow to catch on to the game’s functions, and ends up begging a cop for help who is then bloodily murdered before him, and only then does the situation seem to kick in.

Kaname’s slowness is a mixed-bag, to be honest. He is sometimes rather quick on his feet, showing really great thinking and adaptability, but sometimes he is uncannily unaware. This joins the other large plot holes of the setup, one of which is nobody seems to latch on to a baseball mascot running around murdering people, and the other is more mechanically, where Shuka, Kaname’s second opponent, ends up twisting what we seem to understand are the rules.

In a bid to find out more about the game, Kaname messages a girl that offered him aid during the first battle, and goes to meet her. Since he cannot describe his ‘quirk’ of a gift, she goes full murder-face on him. But, urgh, anime things happen. This is both a good thing, because firstly, the series embraces its primary demographies primal lust for blood with subservient-yet-lethal blonde women with an almost comic glee; and, secondly, a bad thing because Shuka’s gradual descent into abusive-affection is one of the most frustrating tropes common to the medium, forcing fanservice and sexuality in one dirty swoop. 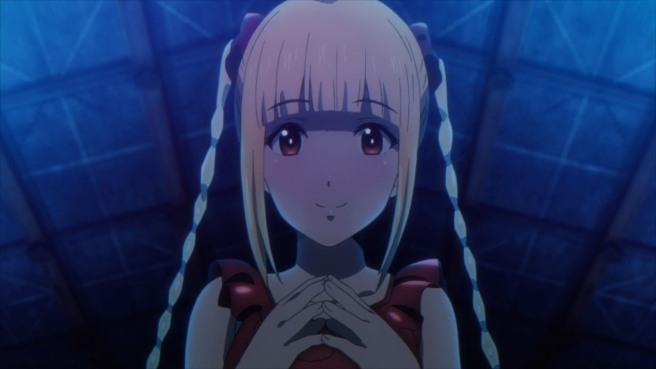 Still, if nothing else, Studio Nexus are flexing their animation prowess again – just a handful of months after the technical demonstration, Granbelm. The sharp cuts of the soundtrack really help the convoluted scenarios become intense, and quite a few times I was biting my nails at the suspense. Some of the background art went to artistically simplistic during extremely kinetic moments, but on the whole there was a lot of showy-off scenes sure to grab your attention. The production was not as impressive as their former work, but it was definitely a strong one.

This thankfully means that Darwin’s Game is a fluid watch. It’s no high-art, already throwing in some casually demeaning assassinations of its women (and of women kind in general from a couple of… slightly misogynistic quotes and that ending), but the rapid pacing means you can view its edginess with a mind to theorycraft and fantasise, or with pulpy violent entertainment for regular and efficient bursts. It’s smooth, and I respect that. Let’s hope it doesn’t get too bogged down with philosophy and just plays it straight.