When your chief gimmick is a world of anthropomorphic animals living humanistically – and you don’t intend on having light-hearted jokes at the world building’s expense – you’ve gotta snatch levity quickly. BEASTARS is the type of anime to reach out and grab, grab, grab your attention, and it doesn’t miss a single beat. 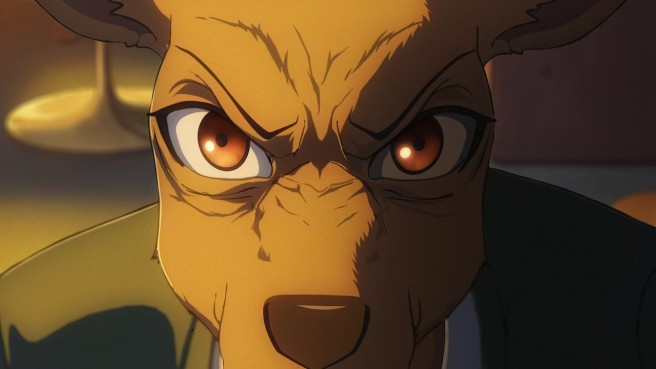 Not a second is lost setting up the trifecta of protagonists. Legosi’s mysteriously quiet demeanour clashes with his predatory traits as a member of the wolf species; Louis is the star actor of the academy, who refuses to be a subservient deer like the rest of his species and has the drive more typically associated with carnivores; Haru is a white-rabbit, whose small, cute form attracts the eyes of hundreds of boys, and the jealousy of girls, too. Within one episode, the characterisation is thick, but runs parallel with world-building. What may seem like a simple opening episode has layers upon layers to read into, posing questions of how the world works and answering many more in action rather than explanation.

It’s already clear that BEASTARS is one of the more gracefully written anime of the year, and it continues in that vein as it enters its first dramatic arc. The meaning of species takes centre-stage as Legosi is last-minute drafted as a villain in the stage-play going head-to-head against another predator. The tension that BEASTARS can craft is much like all of its other feelings: excellently rendered. Legosi’s internal monologue is given a bass-boost and a breathy quality, while the visuals will often paint the abstract in vivid detail, detailing the lost, but relatable, qualities of a wolf in sheep’s clothing. 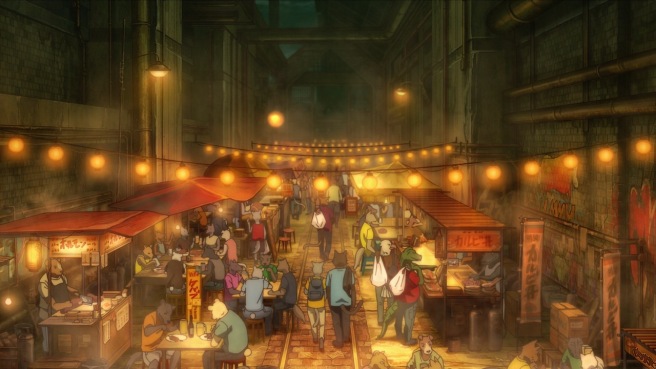 The CGI is really terrific throughout, and is particularly excellent when the group take a trip to the city. More typical anime productions will use CGI actors for background mobs, but BEASTARS – an entirely 3d developed anime – goes the extra step to imbue a living quality to its world. When the scenery opens up to show the wider-picture, the world continues to live and breathe in its unnamed cast. Even detailing all these different animals would be a feat in itself, but the fur renderings are particularly impressive, and sharp reflections are utilised within tight cinematography to tell a more introspective, visual story of a world swallowing its predatory guilt. BEASTARS utilises all of these ideas effectively, questioning the society it builds.

But, oddly enough, it doesn’t contain the fallout for when its questions begin to enter our own world, and the questions lose some poignancy as they got lost in convoluted plotting. BEASTARS is an anime that struggles to keep itself on-target as it enters the later stages, and its final catalyst for the romance is, frankly, a mess. What ensues is a series of upsetting mistakes that push the show off the podium. The mess of its latter arc, whereby gangsters and animal traffickers show up, is poorly foreshadowed, weakly thought-out, full of contrivances, and sadly reduces the heroine to a ‘damsel in distress who needs her love interests to save her’ role. Thankfully, the arc doesn’t last for long, and the scene involving a will is one of the strongest from the entire show, but it’s a massive black mark on an otherwise impressive showing.

This huge leap of tone was, rather sadly, foreshadowed by lack-of-foreshadowing. Similarly to my fears about Araburu Kisetsu no Domo yo., BEASTARS didn’t set a clear goal of its endpoint near the beginning – so the finale was bound to feel rushed. The ideas the show grappled with, such as changing society’s views of species fundamentally, is too big as an idea for the single series to address.

Of course, this means that the final scene, saying ‘See You 2nd Season’, is rather hopeful in that the story will hit those beats. But, do I trust it to stick the landing? I hope that promised second season is more thought out than this one’s finale, and is more akin to the excellent start. 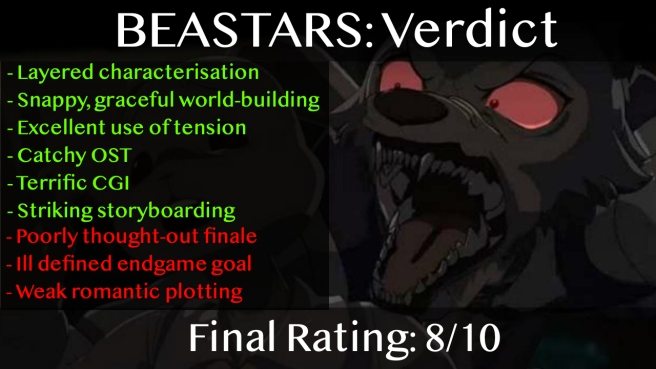 One thought on “BEASTARS Review”