Being an anime original, there’s certain things that we were quite unsure of with regards to ID:Invaded – other than, of course, a marked sign of quality. I could go the route of explaining a brief synopsis of these first couple of episodes, but that wouldn’t be fun: this show is a mystery, and piecing together what it’s going to be doing, not just in its premiere, but throughout the entire series, is the puzzle. A small spoiler, though: it’s one worth solving.

The first thing that sticks out about ID:Invaded’s double-episode premiere is how well organised it is. A tightly focused screenplay and sharp direction is the key to how it all unravels; a series of questions are gently suggested, with answers gently hidden amongst the outcome of events. Proper nouns and other sci-fi jargon, such as ‘cognition particles’, aren’t ever explained – not even to the department’s rookie – but used eloquently in context, through natural, sensible conversation of professional detectives and the futuristic techies assisting them. As the show gifts answers, it consistently leads you to ask more questions. After solving the riddle of what the world is, the cinematography opens up, asking us why, and such elegant mystery direction is a treat to watch. 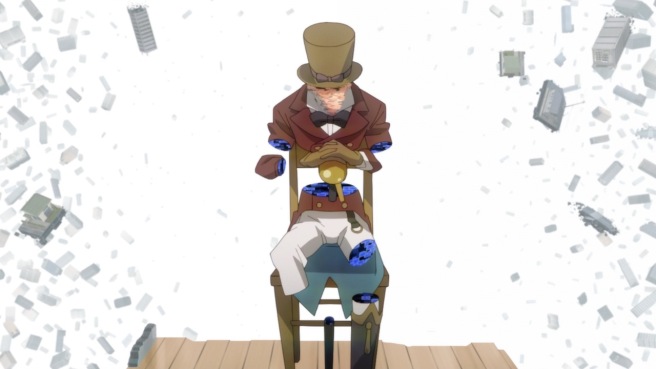 Because of this constant tension, a push-and-pull of questions and answers, ID:Invaded is fantastically compelling. I found myself inching closer and closer to the edge of my seat, analysing the clues to just what is going on, such that my curious but heightened energy was mirrored by the synth-heavy soundtrack’s forming and rising tempo. Equally as impressively, then, is the way that the culmination of the mystery – an exhilarating showdown between a detective and the perpetrator – continued to excite the grey matter as much as it did the adrenal pathways.

Following in the footsteps of other psychology-based sci-fi works such as Minority Report (and its derivatives, including the recent anime phenomenon, Psycho-Pass), ID:Invaded poses a profound look at the future of crime solving. However, the show doesn’t earn its cerebral side from a meta-analysis of political fallout, but rather by going deeper into the psychotic states of the ‘will to kill’. Humanity is left at the door; a blunt visceral aesthetic mirrors this departure of morality, drawing you in to ask further, more personal questions.

Who, then, is Sakaido? Who is Kaeru? They’re some of the most pertinent questions raised as The Perforator’s case is solved across these two thrilling episodes, but they form a surprisingly compelling emotional core that few horizon-based intellectual television manage to meaningfully craft. Just before the credits begin to roll, the perspective is flipped poignantly, diving into those questions’ semantics and shocking the senses. ID:Invaded’s world expands outwards with each pressing minute, creating an immense depth of mysteries to be solved. Not only is mystery solving smoothly demonstrated in these intriguing, exciting 40 minutes, but the questions it poses are ones that linger far beyond the show’s runtime.

One thought on “ID:Invaded – Episode 1-2 Review”