I don’t think anybody genuinely thinks that, on first glance, Promised Neverland would be a sweet series. And why would you? Looking over the promotional material, you’ll be presented with a collision of saccharine – to the point of fake – sweetness and looming shadows. The cat’s out of the bag within the first episode, anyway, so why should I restrain myself? Here goes: this is an anime about killing children. Or, more precisely, children trying to escape their fate of impending doom. The concept could be littered with symbolic overtones to make a grander message about ‘puberty’ and how we lose our innocence or something, in fact I’ve seen similar before in the short 20 minute OVA, Mitsuami no Kamisama, but Promised Neverland is not that kind of a show. This is, no strings attached, a thriller. And an exciting one, too. 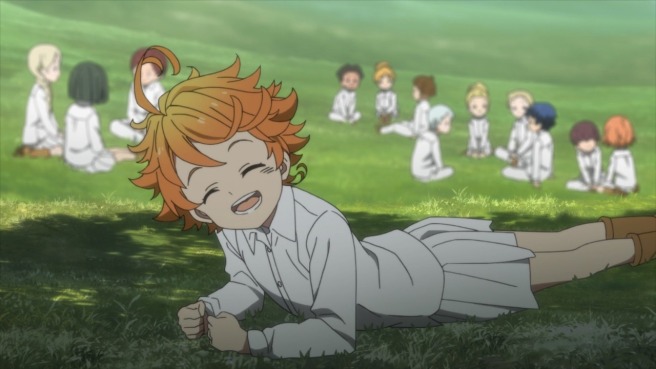 The dominoes start rolling when Conny, one of the younger girls at the orphanage, is re-homed. It’s a sad scene, as she thinks she’ll never get to see this makeshift family again, but 11 year old Emma and the gang convince her it’ll be okay! Sadly, she drops her cuddly toy, which she cannot sleep with, on the way out. So Emma rushes to ‘the wall you must never go near’ to deliver it to her and discovers the shocking truth: it’s not an orphanage, but a ‘farm’, where giant Lovecraftian monsters raise kids up to eat them. It’s like Chicken Run, but given a horrifying do-over.

As Emma and her two best friends Norman and Ray, begin to grapple with their reality and put schemes in place, one of Neverland’s biggest weaknesses becomes apparent. There are scant scenes showing the trio earning their ‘friendship’, as the only light-hearted scenes are gags directed more at the audience than at the other cast-members. This means that the majority of the anime is focused on their hardcore discussions, and since their developments are only given brief lipservice before being put into action, it feels disingenuous. Particularly when it comes to their ‘intellect’.

It’s a pet-peeve of mine, I’m fully aware, but the group’s variance in smarts is frustrating, and undermines the audience’s. Purported to have perfect test scores, the trio are imbued with enough intellect to make their actions supposedly believable. But you’ve also got to remember that these kids are eleven, and when the narrative tries to remind us of this, the believability plummets. And it’s not like the overall storytelling can keep up with their smarts, either, as the rapid discussions over their situation are full of conjecture and leaps-of-logic which are consistently gratified without enough of a good basis. You’ll be scratching your head several times wondering ‘how did they come to that conclusion?’, because high test scores don’t allow so many fruitless deductions. Fans of female protagonists might also feel disillusioned, since Emma’s personal cunning is, for the majority of the season, quashed beneath Norman and Ray’s planning and actions; it feels more like she’s being dictated to.

It’s worth getting back to the mission statement, because, aside from these hiccups, Promised Neverland delivers well on its premise. Mama, the orphanage’s housemother, has a mindset you’re consistently trying to get a finger on, and she, along with the other world-building, raises so many questions about the system. Who is friend, who is foe? So many questions are enticed to be asked, and that makes Neverland such an enjoyable ride. The drip-drip-drip of reliable information is one of the series’ fortes, but how it presents itself is yet another. 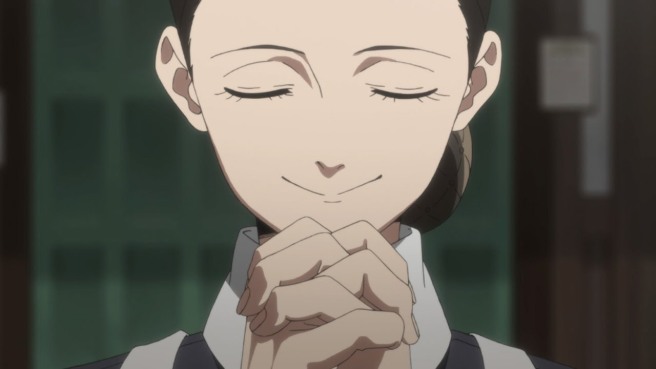 Hair-raising tension is earned, from the sharp use of looming camera shots, creaking sound design and impassioned voice acting. As Sister Krone enters the fold to ‘assist’ Mama, and the varying factions vie against the kid’s plans, there are many powerful, gut-wrenching scenes as the world gradually de-mists. Every little step forward is calculated, expertly directed, and backed by one of 2019’s most evocative OSTs. If you can push away the dissonance caused by the super genius leads and other plot holes, you might just find Promised Neverland to be one of the strongest anime of the year.

6 thoughts on “Yakusoku no Neverland Review”