Weekly Roundups are a new post where I cover some of the biggest events in the seasonal anime I’m watching.

Sorry about the delay. It’s been a tough old week.

Hataage! Kemono Michi is slowly expanding its pool of gimmicks 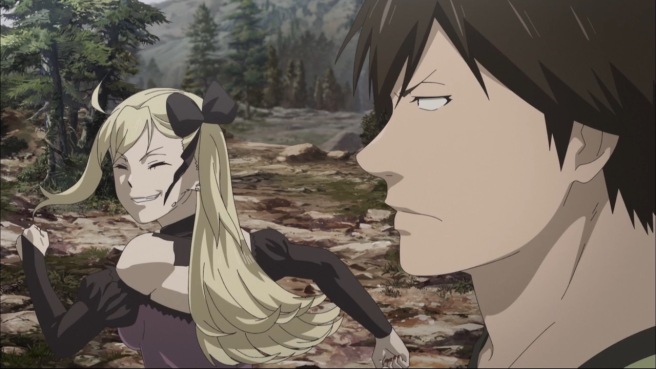 There’s been a bit of a party forming grind recently, in Kemono Michi. Last episode, we added a half-dragon princess and her vampire… I want to say bodyguard, but lesbian stalker is more appropriate, especially after this week’s episode showed her obsession. Our other-worldly pet shop is, unsurprisingly, flopping, and this week in Episode 4, Demon Girl x Part Time Job, the show gives a chance to see that from Shigure’s perspective.

I mentioned how much funnier Shinchou Yuusha is because it’s not set in the eyes of the gimmick character; likewise, Kemono Michi allowed itself to laugh at its whacky wrestler by giving Shigure’s more normal life the spotlight. There’s a possibly a bit of clashing with prior developments here, as Shigure’s introduction to the story was based on her poor money-management skills and yet she is the one trying her hardest to keep the pet-shop afloat financially. In any case, the exhaustion we see as she tries to manage her more eccentric cast is the bit of empathy that Kemono Michi needed to access its weird humour, because we have somebody to empathise with.

And it goes without saying that the party is actually quite funny. Carmilla, living up to her name as a historical, homosexual vampire, is a little bit obsessed with her mistress. We see this most undeniably this episode, beginning with her dream-talking about her, and then demanding to get an artist to ‘capture’ her mistress’ ‘beauty’. But the way her agency flip-flops so wildly, and how those gigantically exaggerated goosesteps show this, is another demonstration that Kemono Michi is really expanding its joke pool. We’re not just laughing at one silly man and the aftermath of his antics – we’re laughing at, and with, the whole cast. There’s still the issue that it sticks on each gag a little too long, and isn’t strongly connecting the dots between its chuckle humour to make out-and-out hilarity, but it’s gradually becoming a solid, weekly comedy. Yes, we’ve got the gay stereotype I always roll my eyes at, but it’s working well enough.

On the other hand, Shinchou Yuusha essentially only has 1 joke. Seiya is way, way, way too cautious and refuses to attempt anything unless he can do so safely. This still hasn’t been sympathetically developed, and the joke itself hasn’t really been built upon, either. So why is it still so darn funny?

In the 3rd episode, This Hero is Too Self-Serving, we’re treated to a training arc. And it really is a treat, despite being almost entirely off-screen – because this is, still, Ristarte’s story of micro-managing an idiot to save the world. She’s pleasant and polite as she goes through her own world, and has a handful of caring figures watching over her… which makes the giant contrast to her normal, exaggerated demeanour all the more funny, as Seiya overworks the personal trainer she enlists for him.

Walking in on Seiya beating the lights out of a Sword God is, in itself, hilarious, but the unapologetic, uncompromising question mark over how we got there is never addressed. It’s the lingering notes of confusion that come together to make the show all the funnier, as Ristarte herself is equally blindsided. Jokes build, and build, and build, and they become that gut-busting hilarity as the key jabs come up, and the episode lands its quietest, yet most cruel quip as the ending comes.

Here are my rankings of each episode from the past week! How’s your seasonal rankings looking right now? Any episode in particular that stuck out?