Sketch comedy in a short-form anime really is a winning formula. The format ramps up the gag pacing, which works really well with shows that rely on simpler, formulaic humour. Get a good gimmick, figure out some excuses for jokes and Bob’s your wacky anime uncle. Tejina-senpai, however, is an excellent example of this type of setup – and it succeeds right down to its roots.

I’ve got to give a standing ovation to Kaede Hondo, voice of the titular Tejina. If not for her heroic performance – gleefully capturing the energy of innocence, with a dash of unaware coyness – the whole thing might have failed. Throughout every scene, her cackles, shouting, excitable inhales and self-demeaning cries are precise to a fine degree. The show relies on Tejina failing at magic in spectacular ways, and while the setups are pretty creative in themselves, even the weaker entries are amusing because of the epic delivery and a breeze because of the frantic pacing.

On her left, though, is a fine example of a Straight Man. Comic straight-men need to add something to the humour, rather than simply re-contextualising the stupid of the Funny Ones. Assistant-kun (who goes unnamed) is roped into the magic club and dragged into her escapades in a feeble attempt to keep her safe, but his own perversions lead to some incredible banter. Yes, Tejina is the funny one, but Assistant’s sarcastic snarks and biting retorts make the comic routines a two-way street.

The magic itself is performance based tricks, whereby Tejina is useless. A wide variety of cultures and ideas go into building the skits, and means that every episode is a relatively creative affair. Of course, it would be a disservice to the show to go without mentioning the backwards-bending it does to achieve some of the sexualised punchlines. Some are actually hilarious, such as Assistant’s ruler joke, but many of the nudity, boob and underwear jokes can feel a little forced when they get further from their magical contexts. Thankfully, the show introduces street performance art and scientific analysis of classic tricks, meaning that the show can stay fresh without having yet another contrived excuse to unbutton Tejina’s shirt or look up her skirt. 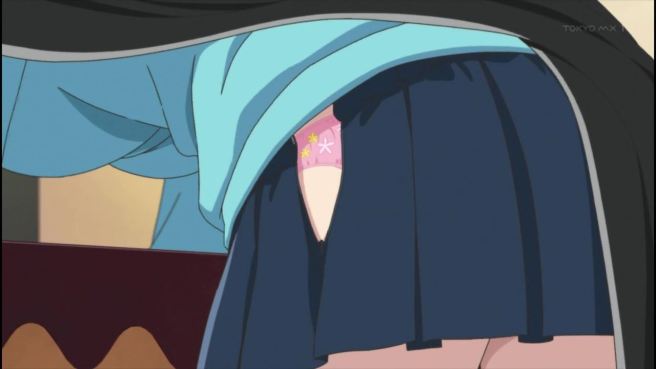 Then again, the show is so rapid-fire that the occasional missed joke is a non-factor. Tejina-senpai, then, is getting pretty close to cracking that winning formula and is, without a doubt, a weekly riot.