Cute girls shows are a tough thing to get right, or even predict. So much of the comfortable, laid-back and ever so slightly resonant atmosphere comes down to tiny little things – editing, acting performances and chuckle quality. It’s with great pleasure that I can say Hitoribocchi no Marumaru Seikatsu (henceforth, Hitoribocchi) is a genuinely lovely little show, standing out in the crowded cute-girls genre with nothing but exceptional execution.

Despite making her debut performance, Chisaki Morishita as the titular Hitori Bocchi puts on a fine showing. All the little idiosyncrasies that make up Hitori balance a fine line between sympathetic and amusing – it taps beautifully into the personal experiences that anybody with a little bit of anxiety can relate to, despite the unrestrained over-exaggeration. “When I get home, I’m dying!” she cries as her new (and first) friend, Nako, jokingly says she won’t give her her contact details, and this shy pessimism is so wonderfully relatable through the goofy lens that is Hitori Bocchi. She even put a sign on the door trying to make people think that the class was no more – to an amusing, though surprisingly heartwarming effect (even if she didn’t, or couldn’t, see it that way).

Beyond the charming protagonist, though, what I loved most was the way the jokes carried forward. Jokes would repeat once or twice to let you know they’re a motif and then disappear for the longest periods, only to be referenced again later. There was a restraint, and the chuckle humour blended in continuity to become just that little bit more special. These are the makings of a very genuine friendship forming, where banter become in-jokes. Hitoribocchi is already such a heartfelt, feel-good but deeply personal experience, and I can’t wait to see this friendship deepen. 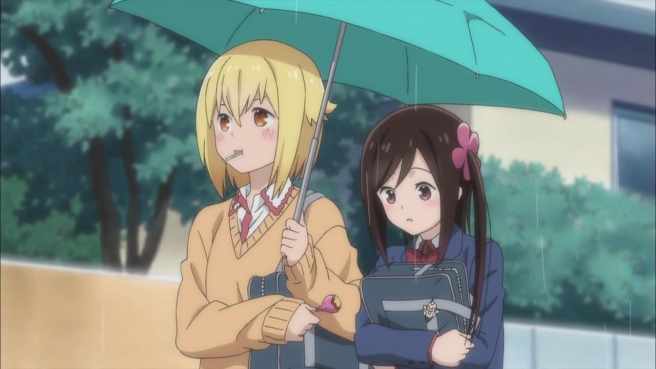 Hitoribocchi is very lovely, both in its visuals and delicate soundscape, but it also manages to find a unique genre that feels, as-of-yet, untapped, with this catchy salsa soundtrack. The montage sequence that lines up with Hitori’s and Nako’s friendship feels just that little bit fun and very, very special. Hitoribocchi’s background characters are all surprisingly well-drawn, even though the to-be-supporting cast are clearly defined by ever so slightly more unique details; I can’t wait to meet them.

If you’re looking for comfy 20 minute excursions, Hitoribocchi is your best bet this season. It’s not going to reinvent the cute-girls genre, but this surprisingly vanilla entry has love poured into it, and that’s all that matters.

Back to Spring 2019 Premiere Reports