It’s tricky to followup a first season, especially one that flew by because of how utterly fresh it felt. Kakegurui’s second offering storms in with the atmosphere of a rockstar – it instantly recalls the fanfare it ended on, and instantly demands attention. In fact, Kakegurui is more interested with bringing you to your feet before bringing you up to speed. That re-establishment of style is key, because even as the first opener recaps the first season with a sharp montage, it never feels like Kakegurui went anywhere. We’re back to gloriously violent, anxiety-inducing gambles in utterly dumb situations, with all the overthinking, overdramatic monologues and ridiculous faces that makes Kakegurui Kakegurui. Welcome back.

Like any good sophomore outing, Kakegurui xx keeps central to what it cemented, but takes its ideas further and adds just that little extra nuance of craft. While the series opener revels in crowd-pleasing, the following few arcs play out as character re-introductions; Mary comes back as the stakes are higher, Yumemi and Itsuki return with a new sense of direction after their crushing defeats, a background character comes to the forefront in new and exciting ways, and around it all, Jabami is orchestrating everybody deeper and deeper into madness. Even the quiet Suzui, who stayed as a voice of reason in the first season, finds himself getting drawn into it; Kakegurui takes itself up a notch in sheer insanity, and it’s so infectious. 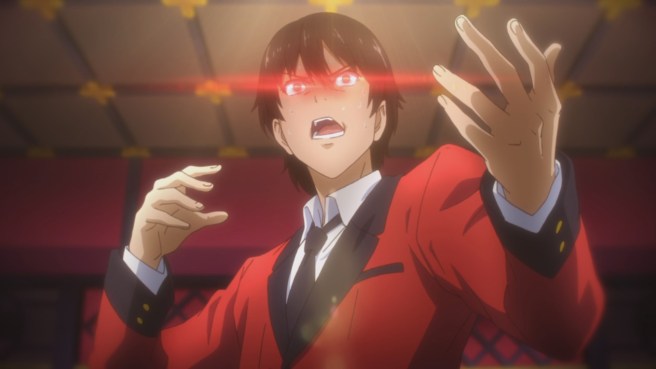 Throughout and between the gambles of xx, the politics are ripe; factions form, negotiations are tense and the power struggle is delicious. In her own madness, Kirari Momobami, the council president, has setup a gamble over her throne. The entire high-school aged -bami clan converge on the school and join the game, where the winner will be crowned the new council president – with all the power that entails. Series main-stay, Mary, takes the most compelling series-wide character focus, as she uses all the character growth she’s received from the bottom of defeat to propel herself straight towards the Gambling Throne. An intriguing partnership forms between Mary and a rather undeveloped character, and there’s a lot to say that is yet to say, but I can’t wait to see the fruits of this venture. It’s sequences like this, as well as a later arc building another very strong pair to go forward with, that makes Kakegurui so enticing as an ongoing story. It’s knee-deep in its own ideas, and is only getting deeper and deeper. With this much character-constellation building and politics, Kakegurui xx is digging a new foundation, which is already an impressive feat considering how self-indulgent its style is. The depth has been gained without sacrificing on shouting, screaming and all the bonkers dumb faces we’ve all come to love. 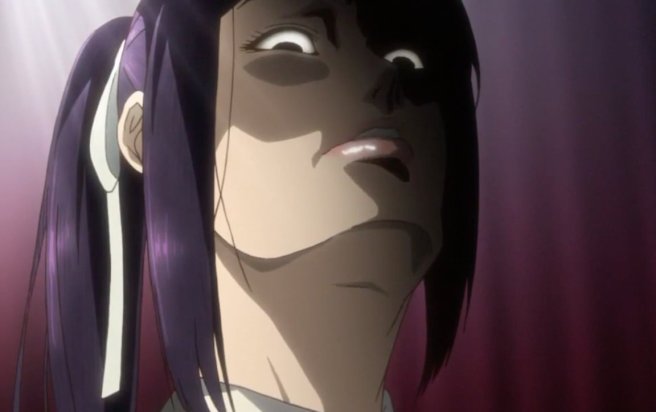 It would therefore seem that perhaps the gambles take a hit. While the String and the Poison gamble are just as exciting as the best gambles of the first season, the Performance gamble, that takes up the 3rd arc of xx, is needless fluff. Ayahi Takagaki puts on a fantastic performance as that arc’s opponent, but those middle couple of episodes felt a little redundant. In that vein, the finale arc has pizazz, extravagance, and some of the finest animation MAPPA have yet given Kakegurui, but is ultimately a little more interested in its next season than a final big push.

On the other hand, the other two arcs are Kakegurui firing on every single cylinder. The Greater Good arc borrows from economic psychology theory to create Kakegurui’s most profound moment yet, and during these episodes the cinematography steps it up to make something truly special. The Tower arc, on the other hand, digs deep into a certain character to find an emotional core that Kakegurui had never interacted with before; the Tower of Doors is bizarrely romantic and, at its finale, heart-pounding. With these two arcs, Kakegurui xx went far beyond where it has gone before, and I welcome more excursions into unfamiliar territory. 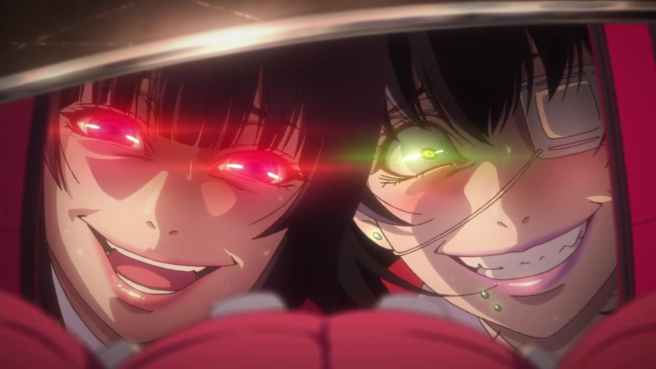 Kakegurui xx is loud, just like its predecessor. Its characters shout, scream and dart between cringe-inducingly violent situations. xx is not going to win over new fans, but it’s just that little bit more introspective as it gradually expands its core ideas. And, really, can you ask a sequel for more? 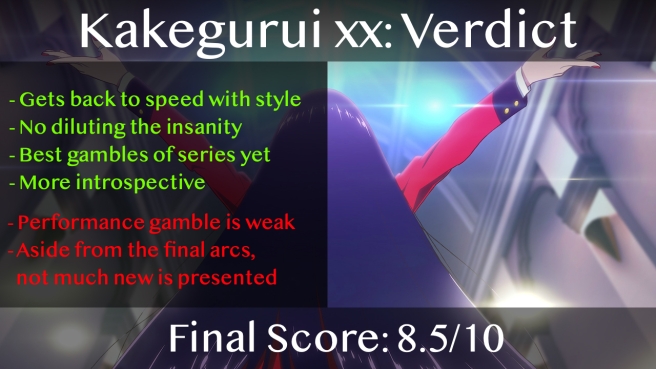