It’s an old debate. What’s more important? The writing, or the direction? While I’m not necessarily going to swing one way because of Kouya no Kotobuki Hikoutai (henceforth, Kotobuki), the show makes a damn good argument that writing and narrative has a lot of power. Put simply, Kotobuki is a TV achievement in everything but its writing, which struggles to maintain relevance and drags an otherwise extremely impressive offering down, down, down to mediocrity.

Director Tsutomu Mizushima’s fetish for dated war machines gave us the rather spectacular Girls und Panzer, and snippets of aerial combat in his masterpiece, Shirobako. Kotobuki is yet another time he lets his desires run rampant. That is no bad thing, for his mastery of craft is one of the best in the medium today at consistently producing jolly good romps, and Kotobuki feels like yet another time he lets the audience in on his fun. As with his other major outings, Kotobuki is extremely sharp: quick-wit, biting retorts and gigantic plot-twists are timed precisely – there’s just enough of a pause to be jolted and blind-sided, but not enough for it to fully compute as it hits the next scene. The show carries that sense of awe and rapidity forward, and at its best, Kotobuki breezes by.

More broadly, the action scenes are astonishing. While the tactics might be too complex for non-avian watchers and too simple for fans of aerial simulators, there’s some truly beautiful filming of plane combat. It’s really quite inspiring how much meaning is crafted in the flight patterns and the gentle yet deafening wooshes. As a pure action show, Kotobuki has audiovisual spectacle to spare. And that’s despite the fact that the CGI can be extremely wonky in its constant swapping with 2d art.

The plot of Kotobuki is extremely vague. Throughout the series, it tries to creep up and tie together all its former snippets of world-building and faction-forming… but it’s hard to follow its rapidity, simply because it’s hard to care. The overall structure of the series is too disconnected to ask the audience to jot down all the different characters residing too far from continual plot-lines. It’s easy to feel like you’re juggling names of characters that feel like one-offs. 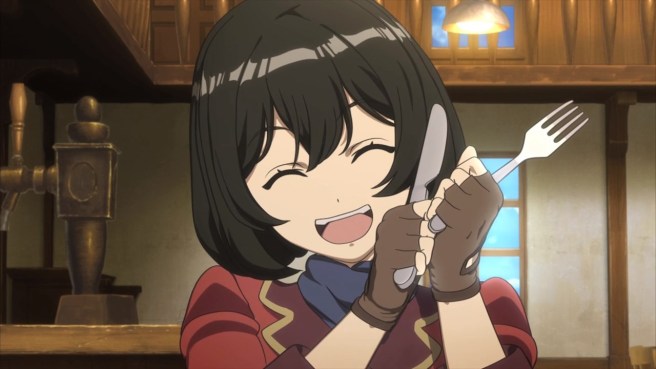 Amongst the regulars, the emotional core feels far too distant. Kylie is supposedly a main character, and while her development is well-told, it doesn’t produce much more than a generic, spunky tomboy. If the chemistry were there to offset that, I wouldn’t be complaining, but despite the biting dialogue, the Kotobuki team have little to jab each other about other than basic traits. Reona and Zara, the oddball parental figures of the group, come close to forming Kotobuki’s personal hook as their relationship and history feels indicative of something greater. Even by the finale, their romantic history doesn’t feel pushed enough to be worthwhile. A set of looks and softly-spoken dialogue that hints, but never fully develops, the greater romance between them, is the major emotional core; it becomes clear, then, that Kotobuki wastes its runtime.

With no personal connection, and no relevance in the plot, Kotobuki feels like it drags its feet, almost as a last resort, through excellent action scenes and shallow comic rapport. Truly, Kotobuki can be tremendous as an action romp at times – it’s funny, sharp, tense, exciting… but, for the lion’s share of the runtime, barely interesting, rarely feeling and never meaningful. Turning your brain off between the action sequences almost feels a necessity. In the end, the mediocre writing has such a damning effect that it’s honestly hard to recommend this show that asks too much for popcorn fuel.