Evergarden makes a tremendous sales pitch. The idea is simple, but ripe; a battle-scarred veteran seeks purpose, meaning and to understand love after the war is over, and she atones and attempts to learn this through writing letters on behalf of other people harmed by the war. Throw in gorgeous art and some resonant musical motifs, and you might just think you’d have something truly special on your hands.

As soon as you take a magnifying glass to it, the facade crumbles. 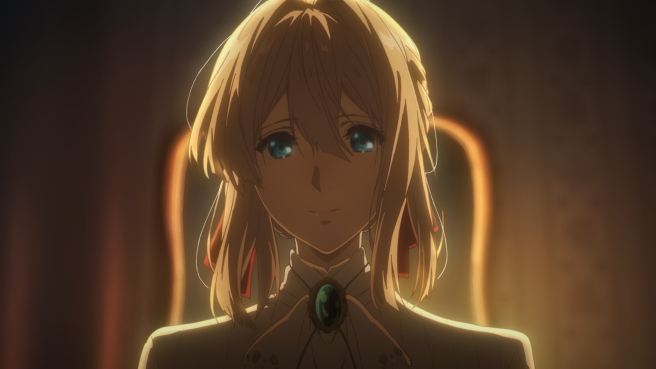 Both within the episodics and throughout the series, the narrative construction struggles to overcome the trite dialogue and clumsy emphasis on its greater points. Episodes feel divided between dwelling on the storylines of their episode-specific cast members and feeling like it was merely a diversion, as awkward soliloquy attempt to re-centre the emotional climaxes to Violet herself. There is no catharsis to be found from either the sloppy sentimentality of the non-returning cast members, or, most pertinently, Violet’s development. That’s not to say every episode is an outright failure, for example, the story of the translator’s diction managing to match its adolescent melodrama with the directorial extravagance triumphs (largely because he gets the finale to himself). Moreover, there are definitely strengths to be found in the series’ quietest moments, such as the cast’s quiet shock at Violet’s metal arms. But this is not a series that often represents being well-tied together – it mismatches its episodic nature with its larger themes, and often with its directorial unabashed strokes, too. Those themes are rather simple in fact, such as difficult conversations or adolescent love, but they aren’t handled with care, and it feels like the series is simply too ambitious doing it all at once that it has to resort to a clumsy script.

And that’s not mentioning the whiplash as the series earns that “action” genre-tag.

Violet herself is a major point of contention in that regard (and that’s not just because of the eye-roll that the reveal of her age causes). Her character arc simply does not flow – neither in her journey as a writer, as a veteran or as a convoluted orphan of war. Despite the intricate (and rather over-exaggerated) backstory, she does not converse with the handful of events that made her the person she is today; frankly, she’s just another, overly-pretty, cold anime doll, and the uninspired voice acting does nothing to sell her as more. Throughout the series, her character’s trajectory is a nonsensical back-and-forth. Her personal letter-writing chops go from barely-capable to spontaneous flowery poetry during the gap between a single episode. She makes banal rhetorics on what love may or may not be, and it does not come across as meaningful, but more like she’s collecting milestones and ignoring them. Neither does she feel like an amalgamation of her backstory or the story that she accumulates throughout the runtime.

Violet’s own personal struggles with chronological sense would perhaps be more understandable if there were side-characters that she could bounce off of. Gilbert, a former lieutenant who employs her at his postal service and functions as a (mostly absent) father figure to Violet, is the only member of the supporting cast with either reasonable development or screen-time to exhibit that. Thankfully, the supplementary OVA (that fits between episode 4 and 5) does give a brief amount of cast atmosphere for Violet to feel among, but within the series this is never demonstrated. There’s no sense of chemistry, anywhere, frankly. With this striking blow, the series’ clunky storylines and Violet’s asinine arc battle against the hyper-dramatic tone and lack of personalities to feel as if there’s almost nothing of value here. 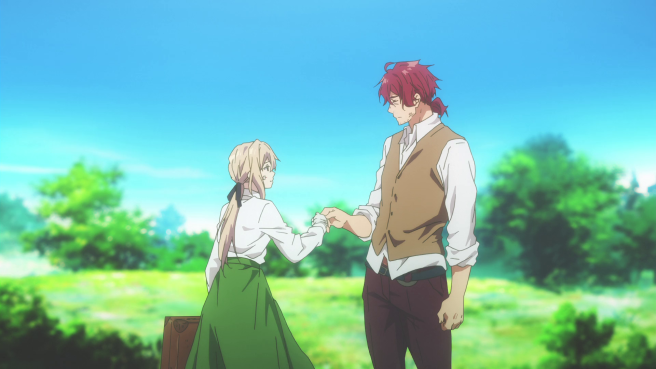 Other than, of course, the beauty of its audiovisuals. While the cinematography of its more distant shots feel functional, I cannot fault the highly competent level of craft here. Barring the CGI doors, the art is truly exquisite. The series falters at its occasional night scenes where the intrusive grain filter washes out the colours, but otherwise the series is a visual achievement in modern television anime. In the aural sensory spectrum, the orchestral’s romantic range of dynamism dominate the soundscapes, tremendous arranging its simple but evocative motifs. It’s hard not to fall in love with the presentation of Evergarden, even if everything else suggests something below mediocrity.

I never like to say that something misses its lofty ambitions, but Evergarden feels like it truly missed the mark. The utter dedication to grandeur is almost commendable, but in the wake of its failure, leaves little else to really appreciate. 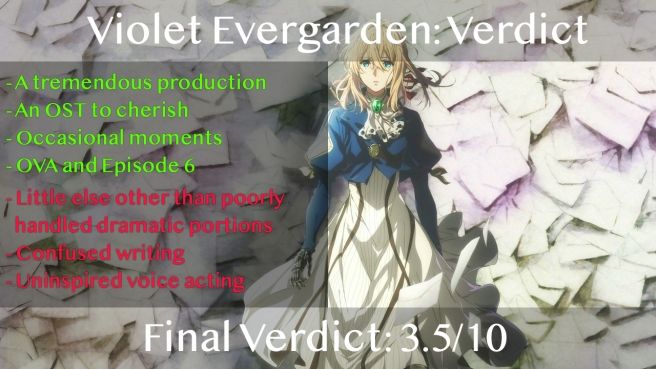 One thought on “Violet Evergarden Review”