Star Twinkle Precure is a bit of an odd experience for me. Owing to the classical female-demographic roots of Precure as a magical girl show, characters are usually drawn much more insertable or identifiable for young girls than the cast of Star Twinkle is; this new band of Precures feel more derivative of cute-girl/ moe styling, right down to the food sharing and yuri subtext. But that’s no bad thing – this cast is colourful, loveable, and O so adorable! Lun already seems to be a big hit because of those huge expressions; personally I am Team Hoshina, as she’s just too cute; Erena seems to have a big following and is unlike any prior Cure; Madoka’s only just been introduced, but she’s positively going to shine, and has already been given huge character focus. 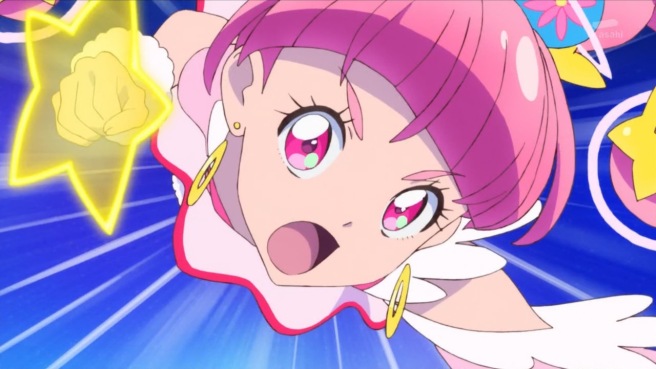 With 5 episodes down, Star Twinkle feels like it’s only just revealed its hand, so it’s hard to tell too how this series is going to play out, but the long and short is that I like what I see so far. Perhaps more than I should, though.

The theme of Imagination and Drawing seems to be pushed by the styling and dialogue more than actually meaningfully parallel to the narrative, for example, their transformation sequences and magic use pens and notebooks as key motifs, but only Hoshina has really conversed with her imaginative side (and only very briefly). Hugtto Precure was incredibly thematically tight, and Star Twinkle seems to be somewhat influenced by that, but it hasn’t gone too far to paying off on that. Still, there’s plenty of time. 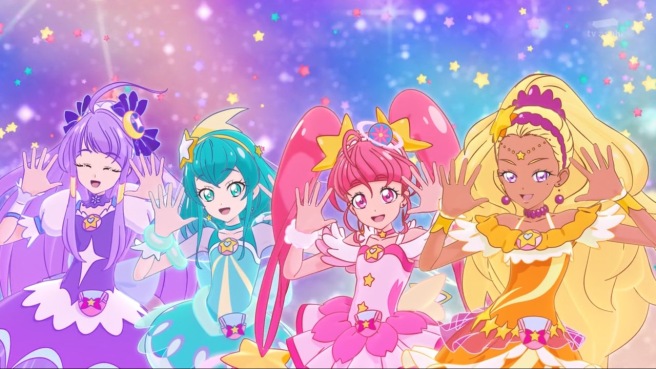 But how will that time be spent? The Precures have simply been introduced thus far, with only 1 episode to develop Lun’s and Hoshina’s relationship (which was actually very sweet) via misunderstanding and eventual healing. Will the greater cast play a bigger role, or will the many episodics stay fairly central to the main characters? It’s hard to tell right now. With 4 Precure already setup rather quickly, the series probably won’t make too much of an adventure out of locating the new Precure, but on the flip-side, has a lot of putty to play with as each of these Precures has definite room for meaningful arcs. I predict the series will stay pretty central to the characters as the Precures try and reestablish the 12 Star Princesses in the Star Palace.

As aforementioned, Madoka, but also Elena, seem to have the most ripe storytelling for the immediate future. Both characters are extremely popular girls at their school (in a very Class S parody way, once again feeling like cute-girls styling), but both have conflicts with that: Elena has a large family and a family business to take care of and is in fact quite distanced from her classmates (perhaps why she is so revered?); Madoka has a lot of pressure from her family and classmates and feels she is struggling to maintain that image. These things seem very likely to give some strong emotional payoff, and I hope they’re given due development.

Hoshina and Lun’s development is likely to be more backloaded to series or mid-series climaxes. It also makes sense then, that they do not seem to have immediate character routes to walk down.

Lun is, well, an alien (and an adorable one at that, who has the cutest faces), and the topic of her foreignness has come up a few times – both for comic as well as minor dramatic reasons, but is mostly just being accepted. Obviously, one day, she will have to leave (episode 49’s gonna be a tearjerker as she leaves; you heard it here first), but even before then, there will likely be struggles related to her family, and probably some simple and cute episodics about her struggling to fit in. 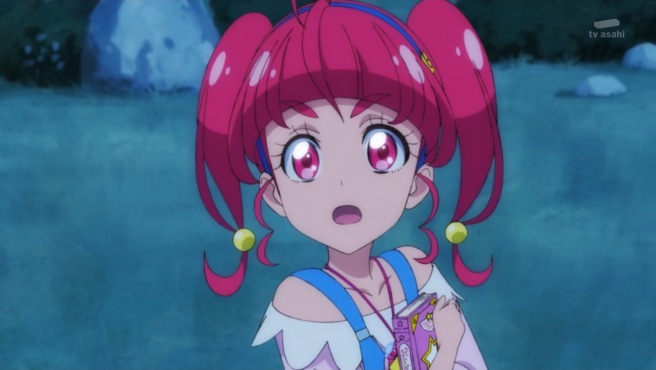 Hoshina, on the other-hand, is more of an oddball. Where her character is going is a mystery to me, though some ideas have been setup. She loves the stars, and in the first scene of the first episode, was in her bedroom, gazing up at them and drawing constellations. There was some conflict with her grandfather though, and I wonder if her future (or, Imagination) is being funnelled in a way that will be discussed later. Moreover, she seemed very friendly with an old man who has tried to encourage her love of the stars (though he also seemed very absentminded so it could have been merely unintended), and I wonder what his presence will mean, if… anything. Hoshina herself is a real Star, though (pun semi-intended) – she’s so wholesome and adorable, and makes for some really fun sequences.

Before I leave the main cast, I have to mention Himenojou, who is… cute-girls-tier of crushing hard on Madoka, in a tsundere way. She has drills and an ojou-sama laugh so is a walking stereotype, but it’s weird she’s gotten so much attention. Either she’s the 5th Precure or she’s going to be major to the plot later. I’m all for it. I love these kinds of characters.

The bad guys, the Notraider, are Kappas, and at least one of them wields a Lightsaber. I was a bit disappointed that the iconic buzzes of pylon-static weren’t used as the Lightsaber’s sound effect, but it’s still awesome to see. The bad guy’s henchmen, the Nottorei, remind me of Heartcatch’s mooks (they even make similar noises and have similar designs). Interestingly, despite being 5 episodes in, no monsters have been summoned yet – the Precures have only fought mooks and had brief power-displays against the bosses. This is probably something that will change soon, but it could be an interesting distinction that Star Twinkle makes to other series. 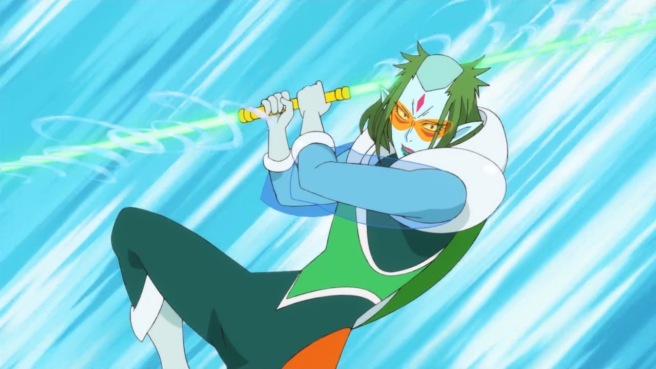 As a production, Star Twinkle feels like what you can come to expect from Precure. It really makes the most of its minimal resources, but goes all out for transformations. It may be a symptom of the greater amount of mook fighting, and thus lower reliance on stock-footage attacks, but the fight sequences don’t feel as animated as other Precures, even if a usually adequate level is achieved. Hugtto and Heartcatch had a much greater (and at times, even unparalleled) level of artistry bestowed by the cinematography, but Star Twinkle is no slouch, and the tradeoff is to go all-out with great facial expressions. And, did I mention they SING in the transformations? Iconography is nailed, as far as I’m concerned, even if I’m not as fond of the Cure designs as I am of other Precures.

Much like Mahoutsukai Precure a few years back, Star Twinkle is digging into its niche: sci-fi, in this case. As a sci-fi nerd, this Precure is my jam. There’s so much to love, too, and the cute-girls aspect might be less inherently relatable, but the charming chemistry and heart-stirring adorableness wins me over every weekend. There’s still a lot of series left, and I feel like Star Twinkle hasn’t reeled off the full manifesto, but that could be a good thing. I welcome the slower, more balanced pacing than last year’s Hugtto. There’s some unique ideas at play, but they’ve yet to come into their own, so hopefully in 5 more episodes, I can talk about how its ideas have been expanded upon, and hopefully, have plentiful more to gush about!