One can usually see an artist’s influences within their work. On her directorial debut, Mari Okada’s prior experience as a successful scriptwriter are clear, because indeed, the movie has a lot of exquisitely crafted dialogue. Beyond that though, all of the themes she’s played with on prior works come to a head on this extremely surprising, but undeniably heartfelt love-letter to motherhood. 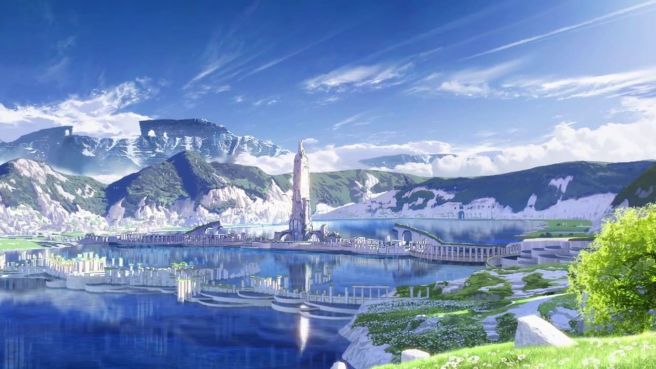 Despite telling an extremely simple story, Maquia crafts a luscious fantasy backdrop to draw from, juxtapose against and run in parallel. With well developed mythical creature lores, the changing of royal powers, conquest, and taking place in some massive city locales, the movie is a snippet of history in a living, breathing world. A lot of this world comes from gorgeous wideshots of background art, but not solely, as Maquia’s own adventure takes her between countries as she learns to live in differing places. Despite being just under 2 hours, and being unlikely to be franchised, I’d be happy to see many more stories in Maquia’s world.

To get back on point, the story of Maquia is simple, even if it relies on some obtuse cornerstones. Maquia is a young girl from the Iorph race of long-lived near-immortals, but when humans come knocking on their door with deadly weapons, she is forced to flee (in a gorgeously animated, exciting sequence). On her aimless journeying after the immediate eviction from her homeland, she hears a baby crying, and the baby represents the sole survivor of some recently slain travellers. She sees this as her new purpose: to raise this child (named Ariel), despite the fact they are human and will physically age faster than her and outgrow her and one day die long before her, and also despite the fact that the Iorph are being hunted down.

There’s a lot to take in, but the streamlined nature of the story makes it very easy to associate with. Ariel’s growing up from child to adult as he learns the nature of the world and his adoptive mother’s circumstance and identity, take centre-stage alongside Maquia’s own maturity as she tries to find purpose in life. The existential underpinning of the story is symbolically discussed with surprising nuance: we see a dog go from adulthood to old-age and die, the final flight of a once dominant species of dragons and the rise and fall of an empire. While these things aren’t given tremendous development, it did not feel in the interests of the movie to use them as more than a backdrop.

That’s because the message that Maquia crafts is inherently beautiful. Kings come and go, wars begin and end, but what matters most is to have the courage to love, even if it may seem like everything will be taken away and the time might be wasted. Maquia finds the strength to give life her all against the dread she feels and the endgame she fears, because, simply, that is the point. It’s this nuanced existential discussion that Maquia crafts, using a boy’s entire lifespan and the vast changing of the world as tools to get to the little bits; it gets to the the details that make nihilism so… undreadful, and make live so worth living.

And o, how beautiful these details are. Maquia crying in the rain as she sees the love that Ariel has for her constitute major emotional catharsis and centrepieces of the movie, but there’s more subtle scenes such as her simply tickling him to sleep. The gradual difficulty with which Ariel distances himself from her as he grows up is a tough series of events to see unfold as a viewer, but are so naturally introduced to the story. Motherhood might not seem so different or unique to other, more worldly instances of motherhood you’ve seen before, but the specifically chosen and well developed vignettes of motherhood are this movie’s bread and butter.

It’s likely to want more from Maquia. Throughout one single lifetime, the magnifying glass is brought in close and taken far away, and the world is merely painted in all of its colours – both ugly and beautiful; both meaningful and meaningless.  With a huge world that keeps on spinning far beyond the final credits, the little snippet that the film gives us simply inspires more stories to be told. But this very specific, simple and small story is, in a word, beautiful. The world can be difficult, and it can painful, and it can certainly be tragic, but to have the courage to love through that is what makes it all worthwhile. Maquia is a truly beautiful movie.